Hindu deities on vodun altars: Rush, Dana. “Eternal Potential: Chromolithographs in Vodunland,”African Arts vol. 32, No. 4 (Winter, 1999), pp. 60-75+94-96. Also helpful more broadly, imo, for any student of folklore/popular religion who’s ever encountered an argument about whether Abre Camino is “real hoodoo” or not, wondered what to think about the development of the seven-colors school of approach to Santisima Muerte, or pondered the relationships between figures like Legba vs. Ellegua.

Giffords, Gloria Fraser. The Iconography of Mexican Folk Retablos. Thesis. University of Arizona, 1969. I tend to assume everybody immediately sees why stuff like this is so interesting. I tend to be wrong. But basically the iconography had never been studied before this, so this was a big deal, this work. And if you like to understand what you’re looking at when you see a candle in a botanica or grocery store, you’ll encounter plenty of stuff that had its origins here whether you personally work with that imagery/tradition or not.

I read Telling Memories Among Southern Women: Domestic Workers and Their Employers in the Segregated South years ago, and even then, before I’d really started *studying* this stuff in any consistent and applied way, I felt like everybody I knew ought to read it. I knew they wouldn’t – people think this stuff doesn’t have anything to do with them if their families weren’t the ones being described in these stories – but they’d be wrong, ’cause this is part of how we got here. And the impact of it doesn’t just disappear suddenly when it’s no longer fashionable or feasible or *whatever* to have domestic employees. This is part of Southern culture, y’all, and it’s part of how your role in it, as whatever sex, race, class, gender, family role stratum you occupy, got constructed and defined.

I still feel the same way in 2020. I think Southern folks should read this book — especially white folks. Especially white women.  Here’s a review with a useful summary at the Washington Post. 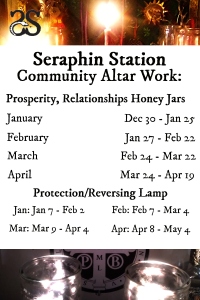 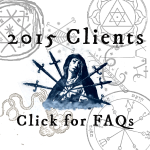 Seraphin Station and Haphazard Station are physically situated in the original ancestral homelands of the Chahta Yakni, Houma, Pascagoula, and Taneks peoples. We pay respect to these peoples and their descendants, who include the MOWA Band of Choctaw Indians and the Tunica-Biloxi Indians of Louisiana, and their continuing presence in the homeland and throughout their historical diaspora.

Current clients in good standing should pop on over to the Discord server for a talisman opportunity. You can get one customized for your specific petition if you get your petition in within the next couple of hours. You can get one after that window as well – I’ll send instructions on what to do […]

Originally posted on Seraphin Station:
Community honey jars for prosperity/success and for relationships/love start tonight. You can book late. Income sensitive options available for prosperity work. Mercury Rx remediation service is also available as a community service if you are experiencing sensitivity to Mercury’s influence and/or have a Mercury-ruled event coming up during the retrograde…

Originally posted on Seraphin Station:
20% off orders placed until midnight on Monday, November 28th. No code needed at Etsy or the main site. (Remember the main site has more stuff and often has better shipping rates too!) Free gifts: Orders of $50+, Nag Champa candles for spiritual awareness & meditation. Orders of $75+, limited…

Originally posted on Seraphin Station:
I’ve been in the process of setting up my “field office” at Haphazard Station in Louisiana, and in fact just about had it effectively set up – I shipped a number of orders from there last week. Last weekend, I headed back to Seraphin Station in Alabama to catch up…