Herbs of lore and faith from Texas to Florida

Some of these you won’t find in published sources on hoodoo, and in some cases they might not have much written about their magical uses at all, anywhere. People have historically worked with what they had in their regions and microclimates, and the knowledge was passed down in the oral tradition. They didn’t always know where it came from. They also didn’t always get to pass it down and so sometimes it just plain got lost. Only a fraction of the regionally-specific lore about herbs and curios in American folk magic has ever been gathered into one place, under one cover or one URL.

Where I live and grew up on the Gulf Coast, we have a pretty big range of influences, traditions, paradigms, and ingredients. Culture, history, biome, and geography mean that there are some things we might do just a little differently down here. And in many cases, it just isn’t realistic to expect to be able to slot everything into neat categories with firm boundaries and say “this is Cajun” and “this is from Mexican herblore” and things like that. I mean, that’s not how folklore and folk traditions work, you know? But to the best of my ability, I’ll provide what info I can, and I’m always on the lookout for more.

(That means I want to hear from you if you’re familiar with herblore of the region and have something to add!)

In calling this a bayou hoodoo herbal, I don’t mean to exclude regions of the Gulf Coast that aren’t really bayou. (The bayou pretty much ends with Mobile.) I just had to call it something. I also don’t mean to imply that everything here would be broadly recognizable as pertaining to hoodoo rootwork specifically. In fact, some of it probably won’t be, and there’s sure to be something in here that everyone will disagree with. It’s more properly a collection of lore about spiritual uses of herbs on the Gulf Coast from Texas to Florida. But again, I had to call it something, and let’s face it, “bayou hoodoo” is a much more appealing and punchy title than “spiritual herblore of the U.S. Gulf Coast.” But I will do my best to identify where stuff seems to come from, and I’ll try to make it clear when a usage is not likely to be recognized outside of this region, or even across the entire region.

The French, Spanish, and English played ping pong with a lot of territory for a few hundred years, sometimes claiming and ceding it aso quickly it’ll give you whiplash trying to keep up. And of course there were already people living in these areas while the European kingdoms were playing king of the mountain, such as the Calusa (in what is today Southwest Florida) who were trading with Cuba before the Spanish ever got there; the Apalachee, living in what is today’s Florida Panhandle; the Chitimacha (in what is today South Central Louisiana), the Karankawa (along the coast of what is now Texas, from about Galveston Bay to about Corpus Christi Bay); the Atakapa (on the coast of what is today Texas and Louisiana); the Tocobaga (around Tampa Bay); Mississippi Choctaw, Natchez, and Chickasaw. The Pensacola (in what is now western Florida and eastern Alabama) had long-established relationships with people like the Creek from a little further west — and so these arbitrary European ways of marking boundaries and dividing up land that we see on maps can often obscure significant routes of cultural, economic, and population exchange that predate them and that don’t align with those European-imposed boundaries. And these existing relationships and alliances can have a huge impact on the ultimate fortunes of a region that’s coveted by a different king or country and has to be constantly defended by standing military and/or ad hoc militias. 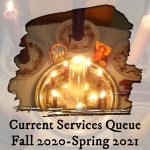 How you know it's officially fall in these parts: you stop seeing ticks on your clothes after you walk through the pasture and you start seeing ticktrefoil instead.
Our kitchen really, really, really freakin' sucks. It's one of the worst kitchens I've ever had, possibly the second worst (first place going to the kitchen in that flophouse of an apartment on Southside in Birmingham in 1994).
Luna, in reflecting pose. Seemingly transformed into pure light
The #moon (one day from full) from the bridge to #dauphinisland
What living with me is like.
Breakfast: figs with a chocolate-sour cream ganache. Plus some yaupon tea.

I cite my sources     wherever possible. If I do use excerpts of someone else’s copyrighted intellectual property under fair use, I use quotation marks or pullout formatting and attribution to make it crystal clear whenever possible.

Originally posted on Seraphin Station:
Just got internet back yesterday afternoon after the latest round of the neverending dance with what must be the worst ISP in North America. So even casual, irregular readers probably know the chorus to this tune by now: “I’m working on getting caught up” and “sorry I’m posting this so…

Nine-day novena and chaplet service for the Cyprianic Holy Days begins tonight. Petition St. Cyprian for matters related to the black arts (including necromancy & ancestor work), uncrossing, protection, psychic vision and divination, and yes, as all the old grimoires mention, love as well. Or just introduce yourself if you don’t work with St. Cyprian […]

Originally posted on Seraphin Station:
Iris fulva, one of the species whose rhizome is called Jezebel root. Public domain. [1] This post represents stages of my research today to figure out where the hell something crazy came from. Watch the crazy unfold. You keep using that word… Jezebel root is not this…whatever this crap is.…

Originally posted on Seraphin Station:
Folks who ordered a St. Bartholomew’s cross talisman to be created during the course of their booked St. Bartholomew altar service: If you recall, these come in drawstring bags that hold the handmade cedar cross along with some other required herbal ingredients. Well, the crosses turned out fine. The handsewn…

Medieval Flowers of the Madonna

This article by Harold N. Moldenke, currently hosted at University of Dayton Marian Library, outlines how the names of flowers and herbs changed over the course of the pagan, Catholic, and then Reformation eras in Europe. It’s a fascinating look into common names and herbal folklore.